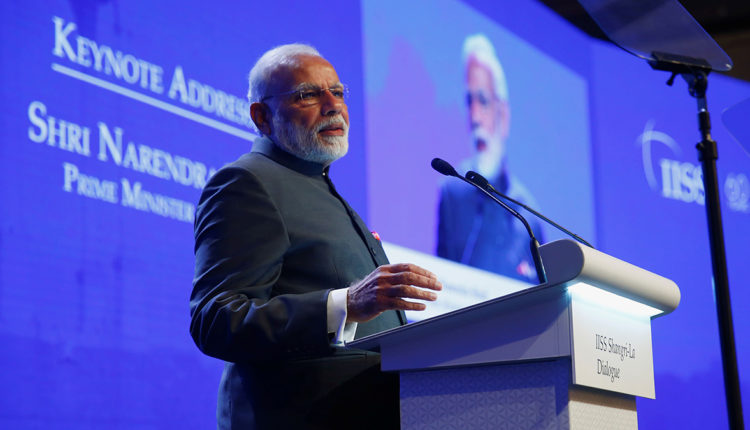 Prime minister must back bold reforms, if India is to boost its international clout

For the second time this year, Narendra Modi has delivered a major speech aiming to explain India’s place in the world. And for the second time, the response would charitably be described as underwhelming.

Back in January, Modi stood up at the World Economic Forum in Davos, Switzerland, the first Indian prime minister to do so in a decade. His remarks, which involved a vague defense of globalization, were forgotten pretty much as soon as delivered.

Then on June 1, Modi gave an address at the Shangri-La Dialogue, a prominent annual security jamboree in Singapore. The result in many ways fell just as flat. More importantly, it underlined an important fault line of his leadership: the fact that his failure to push economic reforms at home is hobbling his hopes of playing a bigger role abroad.

There was much anticipation for Modi’s role as the first Indian leader to open Shangri-La. Run by the U.K.-based International Institute for Strategic Studies think tank, the gathering often provides a forum for the U.S. and its allies to spar politely with China, airing concerns from the South China Sea to saber-rattling over trade.

India last year rejoined the Quadrilateral Security Dialogue — or “Quad” — along with the U.S., Japan and Australia. This is often viewed as an anti-Chinese defense grouping, not least in Beijing. Given the sour state of recent Sino-Indian relations, many in the West hoped Modi’s speech would give forceful backing to the global “rules-based order,” as the U.S.-led status quo is called.

Judged against this backdrop, he struck a cautious balance instead. On the one hand, Modi talked about the “free and open Indo-Pacific,” a coded dig at Chinese expansionism, and also made barbed comments about China’s gigantic Belt and Road Initiative. But on the other he included plenty of conciliatory nods toward Beijing, and even earned a favorable review in the Global Times, the nationalist Chinese newspaper.

Much of the rest of the speech, which ran on ponderously for nearly an hour, was given over to cozying up to Southeast Asia, a region where India has long wanted stronger economic and diplomatic links. Although hardly electrifying, analyst Raja Mohan, one of the more thoughtful observers of India’s foreign affairs, judged Modi’s maneuvering to be a success, noting recent deals to improve ties with Indonesia and Singapore in particular.

Still, Modi’s remarks were certainly more laundry list than grand vision. India says it wants to be a “leading power” in Asia, meaning one that shapes the international agenda and the rules that govern it. Even judged narrowly on the issue of security policy, on this Modi struggled to deliver.

It was on the second area of economics, however, that his shortcomings were more pronounced. Here India should have a fine story to tell. It is the world’s fastest-growing major economy, expanding at 7% or more this year. It sits at the heart of South Asia, a major engine for future global growth. In Modi, India has a leader who, on paper at least, claims to back open trade and globalization.

Yet here Modi had strikingly little to say. There were few more obvious examples than the Regional Comprehensive Economic Partnership (RCEP) trade deal, which aim to bring together the Association of Southeast Asian Nations (ASEAN) with Japan, Korea, India, China, Australia and New Zealand.

India says it wants to sign this deal, which is currently being laboriously negotiated, and which would, if it is ever wrapped-up, represent a big step toward a more open and prosperous Asian economic order. Yet it is no secret that India is also the largest stumbling block to its completion.

Part of the problem is Modi is hemmed-in domestically. Prominent Hindu nationalists within his own political party dislike free trade. Facing a national election next year, he is also unwilling to sign a deal that might expose politically crucial farmers to foreign competition.

Modi faces problems of his own making too. India fears RCEP will leave it swamped by imports of manufactured goods from China. But this is the result of a wider failure, both under Modi and earlier governments, to build a competitive manufacturing sector.

India’s negotiators also worry about the threat of agricultural imports from Australia and New Zealand. Yet this too is a function of domestic weakness, given Modi has done little to reform a farming sector dominated by hopelessly uncompetitive small holders.

Then there is a wider economic malaise. Despite the vibrant headline growth numbers, much of India’s corporate sector remains hobbled by bad debt. Few large companies are striking the kind of bold global deals that were common only a decade back. Even India’s celebrated IT outsourcing industry is retrenching, menaced by rivals using artificial intelligence rather than cheap coders in cities like Bangalore and Hyderabad.

The result leaves potential allies frustrated. “The problem with India is there is no real economic vitality abroad,” one senior Southeast Asian politician told me recently. “Of course we want to do more business with them, but it always proves so difficult.”

After four years in power, Modi faces a tough re-election battle next year. In anticipation, the front page of his Ministry of External Affairs is currently given over to a glossy PR campaign. Entitled “48 Months of Transforming India,” it provides a battery of statistics, boasting of everything from the number of villages connected to fiber optic cables (116,396) and the number of new toilets built by his government (78 million).

Yet none of this adds up to an economy fit for India’s global ambitions. At Shangri-La, Modi could have set out a bold agenda in support of trade and globalization. Instead he was hamstrung by his unwillingness to introduce the kind of reforms that might support an ambitious international strategy. If India aims to be a leading power, and if Modi wants to be a truly transformative leader, that has to change.